The three systems produce an estimation of the semiotic structure of the music piece considered, i.e. a description of its macroscopic organization through a set of structural segments labeled according to the similarity of their musical content.

They consist in three steps: a feature extraction step, a segmentation step based on feature analysis under a regularity constraint, and a labeling step based on hierarchical clustering.

All: PC or Mac with Matlab (signal processing and statistics toolboxes)

System 1 (2010) requires the mfcc extractor from the MA Toolbox by Slaney and Logan, and chroma and beat extractors developed by Ellis (Coversongs project, LabRosa)

The three systems have been developed at Irisa in Rennes and is the property of Université de Rennes 1, CNRS and Inria. They are currently prototypes provided by IRISA/PANAMA under the « Creative Commons Attribution-NonCommercial-ShareAlike 3.0″ license (http://creativecommons.org/licenses/by-nc-sa/3.0/legalcode) 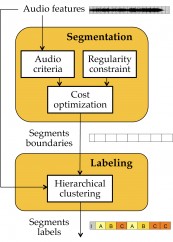